GSSA Publication of the Year for 2011 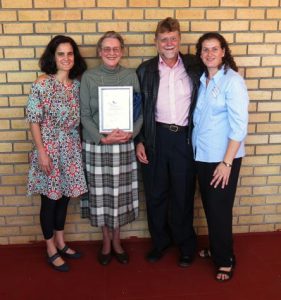 Penelope Forrest’s, privately published book, “A Memoir in Letters”, of the Phelps and Crompton Families in the 19th and 20th Centuries, has been honoured by the Genealogical Society of South Africa (GSSA) with its prize for “Publication of the Year” for 2011. This prize is only awarded if the entry merits it. There were a number of entries considered in 2011. In some years there are none deemed even to merit consideration. She was told that “the committee and judges were unanimous and quite ‘blown away’ by the Memoir which had set a new benchmark in this category.”
Penelope was awarded the prize certificate by the National President, Petro Coreejes-Brink, at a little ceremony in Cape Town on 12th May 2012.

This entry was posted in Awards & Achievements. Bookmark the permalink.